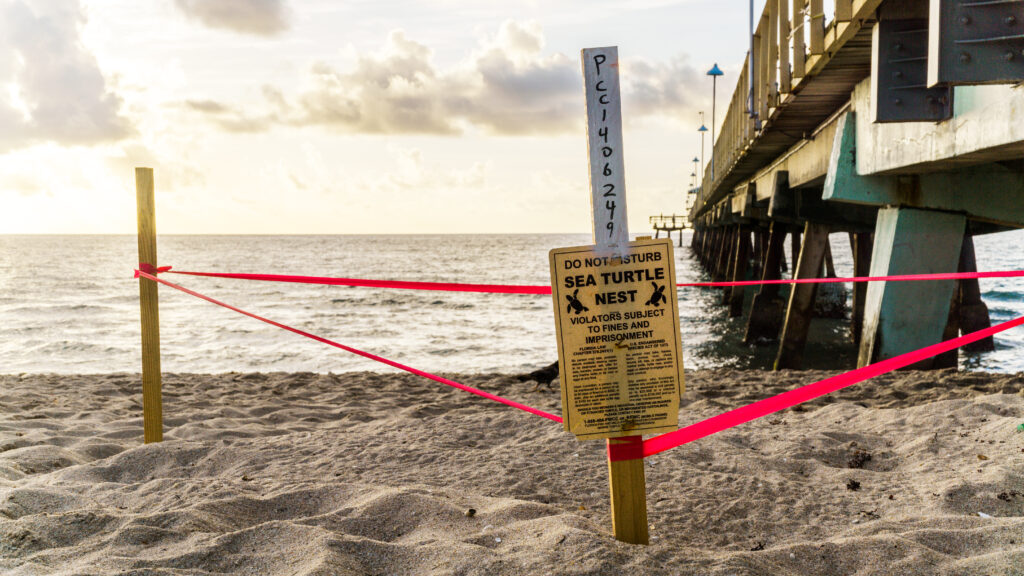 Across the globe, there are seven different breeds of sea turtles, but our coast typically welcomes loggerheads, green turtles, and leatherbacks. Green turtles and loggerheads grow to about the same size, reaching three or four feet long, while leatherbacks can grow to an astounding seven feet!

During nesting season in Lauderdale-By-The-Sea, sea turtles keep to the cool ocean waters during the day, waiting for the moon to rise before venturing out to the coastline where they lay their eggs. Unlike mammals, turtles can lay over 100 eggs at a time and as frequently as every two weeks. Unfortunately, because of human and predatory threats, only 1 in every 1,000 hatchlings will survive to adulthood.

Since 1973, sea turtles have been on the endangered species list due to natural predators, habitat destruction, accidental capture, and ocean pollution. To help protect them, we can all do our part to keep our charming town beautiful AND safe for our seasonal VIP guests. There are so many simple ways you can make a difference.

Millions of pounds of plastic end up in our oceans every year. Not only is it a threat to sea turtles, but to every other species that call the seas home. Consider investing in a reusable thermal water bottle, using reusable straws, and bringing your shopping bags when picking up your weekly groceries.

Coming across a sea turtle nest is exciting, but check it out from a distance. If a nest hasn’t already been marked off, call the Sea Turtle Hotline at (954) 328-0580 as soon as possible to report it.

Did you know turtles are attracted to light? Before light pollution was much of a concern, turtles would use the glow from the moon to guide them to the water when they hatched at night. Nowadays, they’re attracted to the street, where they mistake house and business lights for the moon. If you live near the ocean, invest in red or orange lights to help restore the natural darkness of the night.

Adopted from the Boy Scouts, leaving no trace simply means picking up after yourself. Nothing beats a beach day during the heat of the summer, but keep it clean by properly disposing of your trash.

Participate in beach and waterway cleanups

Looking for something to enrich your time on our beach in Lauderdale-by-The-Sea? Participate in a beach or waterway cleanup and remove debris from sea turtle nesting areas close to the coast. We also have complimentary baskets at many of the beach portals for you to use to collect garbage and dispose of it properly.

There are so many small actions that each of us can take to make a big impact on protecting the sea turtles. If you come across a nesting turtle or catch them hatching, snap a photo from a safe distance without the flash, share it with us with the hashtag #LoveLBTS, and we may feature it on the Town’s Facebook and Instagram feeds.

Relax… and enjoy our waterways alongside our VIP visitors!

Click here to learn more about our Lauderdale-By-The-Sea turtle visitors.

Start the week off on a Zen note at tomorrow's Monday Moonlight Yoga at 8 p.m. at El Prado Park.

Masks are being enforced for this on the beach?

Relax, you're here. Enjoy your weekend the LBTS way.

Our charming town was recently highlighted by @NarcityUSA as one of the best small beach towns to visit in Florida- thanks for the spotlight! So...what are you waiting for? ☀️🏝

You can relax on clear waters without breaking the bank.

4th OF JULY PHOTO GALLERY IS UP!