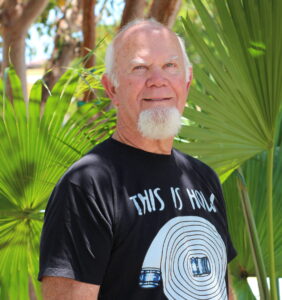 The Town of Lauderdale-By-The Sea (LBTS) has named Bob Karley as its 2022 Fourth of July Parade Grand Marshal. A true Floridian, Bob was born in Broward General Hospital, and has lived in the same house in LBTS for 67 years.

Bob was drafted into the Marines and then joined the Navy where he served for four years. He was stationed in San Diego, Japan, and on the Carrier CVS 12 Hornet, where he assisted with the retrieval of the Apollo 11 and 12 astronauts from the water, 250 miles from Hawaii.  Bob’s first job in Town was at Anglin’s Pier, where “they gave me a job because I was hanging out there all of the time,” and then began working at The Wharf (Now Aruba’s Beach Café) for 15 years.  A career chef for over 30 years, Bob was a chef in various restaurants and clubs, including his favorite, owning the Eastport Deli near SE 17th St Causeway for 13 years.

Bob has been married to his wife Sharon for over forty years. The couple loves babysitting their daughter Elsbeth’s two -year- old son. Bob’s father William Karley was a realtor who served on the LBTS Town Commission for twenty years, and in 1960 was co-founder of the LBTS Volunteer Fire Department, where Bob volunteered for 13 years until his retirement in 2021.

Now retired, Bob spends as much time as possible fishing and camping, while also tending to their large outdoor bird aviary on their property.