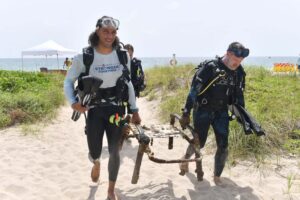 There is strength in numbers and that was evident by the outpouring of support that showed up at Lauderdale-By-The-Sea for the Pepsi Stronger Together and Force Blue’s Coastal Conservation Ops summer tour.

Florida has the third-longest barrier reef system in the world that is known as the Florida Reef Tract. Lauderdale-By-The-Sea is part of that reef tract, which has a three-tier system that runs parallel to the beach.

The town prides itself on having an accessible coral reef known as tier one that is only 400 to 600 feet offshore and is convenient for beach dives. Tier two is about 1.5 to 2 miles off the shoreline in about 30 feet of water, while tier three or the “third reef” is in about 45 feet of water that drops off to about 100 feet.

The Florida Reef Tract treasure is under duress with over 90% of the coral ridge cover reduced over the last few decades. A call to action was sent out to help prevent further damages. Pepsi Stronger Together teamed up with Force Blue, NAUI, Keep Florida Beautiful and dive volunteers to lend a helping hand with the hope of stemming the tide of coral tissue loss disease.

Professional mixed martial artist and two-time Olympic gold medalist Kayla Harrison joined Miami Dolphins wide receiver Mack Hollins to strap on the dive gear for a beach dive cleanup and investigation of the coral reef system. They were joined by 30 former Marine divers and over 50 recreational divers at El Prado Park in Lauderdale-By-The-Sea.

Grab your dancing shoes and swing on by this Sunday, May 22, 2022, for the final Dancing by the Sea dance class for the season. See you there! 💃 ... See MoreSee Less

What's got two wheels and can take you around to explore? A bike! It's National Bike Month and we wanna know- where's your favorite place to ride in Town?

P.S. Rentals are available on A1A just north of Commercial.

Check out this week's sunny Top Picks! Shout out to Malva Bee for bringing some sunshine to our Friday. 📸 🌴 🌊