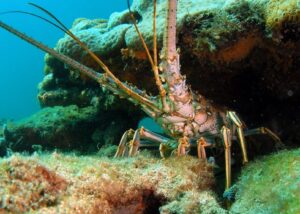 If you’re a diver, you have to be part of the festivities when Lauderdale-By-The-Sea promises “Florida’s biggest lobster mini-season dive party.”

This is the 10th anniversary of BugFest, which is centered around Florida Spiny Lobster Mini-Season, July 27 and 28 of this year.

Registration begins online June 15 and ends at 6 p.m. on July 26, discoverlbts.com/bugfest, and at Gold Coast Scuba in Lauderdale-By-The-Sea. The cost is $30 which gives participants a 10-year anniversary shirt, goodies and a lobster weigh in and awards and raffles.

The events this year, according to Debbie Hime, the town’s marketing and special events manager, start July 26, 5:30 to 6:30 p.m. with the Bug Hunting Seminar, followed by the kickoff party at Plunge Beach Resort, 6:30 to 9:30 p.m. – with music by Scuba Cowboy, hosted by Scuba Radio & Gold Coast Scuba.

Fort Pierce resident and current USA Female Spearfishing Champion Julie Higgs participates because it’s great to dive with so many “like minded” individuals and it’s a fun event.

Dania Beach resident and Chiefy Crew member Andrew Rubin says “Bugfest has been very good to me.” He has won cash awards and several raffle prizes, including an AquaLung regulator and dive tank.