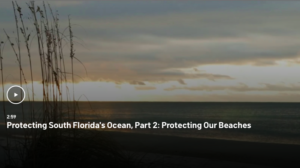 NBC 6’s Steve MacLaughlin takes a look at the effort to save South Florida’s beaches, reefs, and marine life in a three-part series.

The beaches of Miami-Dade and Broward counties are a cherished resource, where the biodiversity of the ocean meets the cultural diversity of South Florida. Making sure the beach is healthy for future generations actually begins in the ocean itself, with corals.

In 2014, the town of Lauderdale-By-The-Sea began working with NOVA Southeastern University to help restore and conserve the corals just off-shore. David Gilliam, an associate professor at NOVA, said that “Corals are the living organism that creates our reefs. Reefs are created by the growth of corals, one on top of each other, for hundreds and hundreds of years, and if you lose the corals that live on top, that reef growth will eventually stop.”

Reefs around the world are dying because of climate change and the warming oceans. And without corals, the beaches would cease to exist.

Click here to read the full article and view each of the three segments.

From t-shirts to ball caps, our local shops offer something for the whole family! Complete your trip to our town with a souvenir to remember your vacay by. ... See MoreSee Less

I love this store

Beach king is the best

Our colorful little town is showing off today.