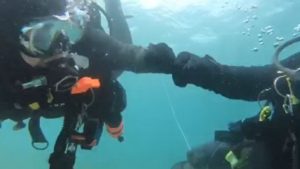 The Town plans to meet with the diver to see what we can do to help mitigate the conditions under Anglin’s Pier, which is privately owned. The Town supports efforts by local divers to pick-up debris under the pier on a semi-annual basis. The next clean-up is scheduled for July 25, 2019, during BugFest, the Town’s lobster mini-season event. We applaud efforts by divers or anyone else who help rescue sharks, pelicans, turtles or any animals entangled by fishing line or other man-made objects.

Two divers who were cleaning up a coral reef happened upon a potential victim of ocean debris and freed a nurse shark that was entangled in fishing line and tied to the reef off Lauderdale-by-the-Sea. Randel Sands and Ron William Nash were diving about 200 yards offshore, near Datura Avenue, south of Anglin’s Fishing Pier Tuesday, when they spotted the 6-foot shark resting on the ocean bed. “When we found her she was just laying on her belly motionless,” Sands said. “She had given up [and] was probably fatigued and she would have been dead in a few hours.” Wearing a GoPro video camera, Sands recorded their efforts to free the shark. He and Nash started looking for netting or fishing line to cut.

“We realized the line was dug into the ground and wrapped around the coral and it was weighted too [with] a one pound pyramid weight on the end,” he said. “There was at least one fishing hook that was in her mouth [and a] three-pronged hook was trailing behind on the line.”

The shark stayed still as they gently cut away the line. “I could see her looking at me… almost as if she knew we were helping her,” Sands said. “So it was kind of a magical moment for us. It was pretty amazing.” Sands said he found a dead sea turtle tangled in fishing line last summer but he called this a one-in-a-million encounter in his 19 years of diving. “I feel I have a better chance of winning the lottery than saving her,” he said. The pier in Lauderdale-by-the-Sea is a popular fishing spot, but Sands said the area is littered with fishing lines, hooks, lead weights and other debris that he and fellow divers often try to clean up.

“For me, to spread the message that the ocean needs to be cleaner and people need to do their part and local legislation needs to change is all a part of making people more aware and educated about our oceans and our beaches,” he said.