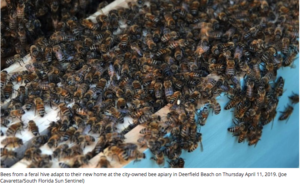 We understand the decline of bees is a worldwide problem. Lauderdale-By-The-Sea is a small seaside village, but we’re happy and willing to do whatever we can to help the environment. We think the Town’s bee apiary is a perfect example of ‘Think Globally, Act Locally.’

The beehive is making a comeback. And we’re not talking hairstyles. We’re talking real honeybees. Experts have sounded the alarm in recent years about a dramatic decline in the nation’s bee population — and Broward County has heard the cry.

Towns from Davie to Deerfield Beach are setting up micro apiaries on public land, doing their part to help save the world’s top pollinator. Plans are also underway to eventually take the beekeeping mission to Miami-Dade and Palm Beach counties, says John Coldwell, president of The Urban Beekeepers and one of the guys behind the trend. The county’s first public bee yard opened three years ago in Oakland Park. That number has since grown to five, with a sixth on the way in Lauderdale-by-the-Sea.

You can check out all of those busy bees by peering through the observation windows at one of these public bee yards:

— Deerfield Beach’s apiary sits near its Central City Campus at 401 SW Fourth St. All of the bee action happens south of the main building and west of the gate.

— Coral Springs has one at Dr. Steven Paul Dog Park at 2915 Sportsplex Drive, behind the community garden.

— And the county opened one in Coconut Creek at Tradewinds Park, 3600 West Sample Road, just west of the kiddie train station near the horse pastures.

Battle of the queens

You’ll learn it’s not easy being a honeybee. The world outside the hive holds its own dangers, but the one inside can be just as harsh. “If something is wrong with a bee, it’s not pretty,” Coldwell said. “If you’re not producing, they throw you out on the ground. And then you die.” Pests and mites can also hurt the hive, a bustling and complicated vortex of activity that can fascinate even non-geeks, Coldwell says. “There’s the drones, the worker bees and the queen,” he said. “The workers are all girls and represent 99 percent of the hive. The drones mate [with the queen]. Once they’re done mating, they kick them out of the hive and they die within hours. I call the drones the Nascar couch potato Budweiser guys.” A weak queen bee makes the hive edgy. “If she’s not laying eggs fast enough, they will make a new queen,” Coldwell said. “And when a new queen is born, they will throw her out on her ass.” Sometimes the colony will make two queens.

“If they hatch out at the same time, they fight it out to the death,” Coldwell said. “The winner takes all and runs the hive. If one hatches before the other, she’ll kill the other queen cells before they hatch.” Now, partially thanks to Coldwell, that fascinating “Game of Thrones-esque” plot is taking place on government-owned land, of all places. These public bee yards help spread the word about why these complex creatures deserve saving. “They help teach folks about the life of a bee and how an apiary operates,” Coldwell said. “We’re educating youth and adults about the importance of bees. Imagine if honeybees weren’t around. Up to 40 percent of the food on the table is completely dependent on honeybees.”

Deerfield Beach got its apiary in June 2018 after one of the city commissioners attended the opening of the apiary at Tradewinds Park. “A lot of our bee populations are dying off in the U.S. right now and we want to provide a safe place for bee rescues,” said Hillary Silverstone, program manager for Deerfield’s bee apiary.

A path to zen

On Thursday, Coldwell said hello to all 150,000 buzzing bees, walking into the apiary without the white jumpsuit most beekeepers wear when doing their thing.

The protective suit makes him uncomfortable and the bees can sense that, he said in explanation. “They do smell stress and they will react to it,” Coldwell said. “If I had a bad day at work, my bees will sense that. Before I go see my bees, I take a shower so I can go to my hive fresh as a daisy.” For Coldwell, beekeeping is a passion. “If I take you into a beehive and show you the microlife of a bee, I will turn you into a beekeeper,” he said. “It’s the most ethereal zen thing you can do.” Coldwell and wife Teresa have been tending beehives for the past eight years, getting their start in their own backyard in Fort Lauderdale. They love their bees and their bees love them. “Bees know me by smell and they know me by vision,” Coldwell said. “Your bees do get to know you. The more they work with you the more comfortable they get with you.”

Bees, whose decline in numbers is partly due to pesticides, help pollinate 90 percent of the globe’s flowering plants and about one-third of the food we eat, experts say.

Those facts hit home with Lauderdale-by-the-Sea Commissioner Edmund Malkoon, who got the idea to bring a public apiary to his city after touring one in Oakland Park. It will cost $7,500 to build and open in early May. One well-managed hive can produce 40 pounds of honey a year. But like public apiaries in other cities, this one’s primary purpose won’t be to harvest honey, but to help save bees, Malkoon said. “It’s not intended to be a moneymaker,” he said. “It’s mainly ecological and trying to create these environments where [bees] can thrive.”

And that’s why finding government land makes perfect sense, he said. Three more public apiaries are in the works in Parkland, Pompano Beach and Plantation, Coldwell said. And he’s also scouting for spots in Hollywood and Fort Lauderdale.